Harmonic Editing in Studio One

Harmonic Editing in Studio One 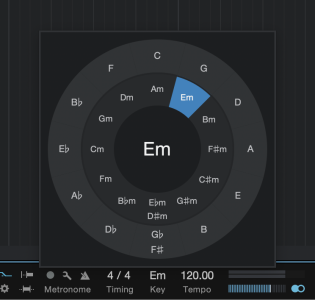 What do we mean by "Harmonic Editing," exactly?

With few exceptions, Digital Audio Workstations like Studio One employ linear, timeline-based workflows. The placement of events to the left or right is indicative of their placement in time; leaving the pitches of sequenced MIDI notes to be intuitively illustrated vertically—lower notes are placed further down, and higher notes further up. Historically, it’s been very easy to re-arrange things horizontally in time to edit musical arrangements. You can drag and drop an entire bridge section to a new place in your Song quite easily. Or duplicate an entire chorus with a simple copy and paste.

But selecting only the major third out of a Cadd9 chord (a C-major with a ninth interval added) to move it down a half-step to create a Cmadd9—without changing any of the other notes in the chord—well, that kind of editing has been impossible in rendered audio until quite recently. (It was never an issue in MIDI, of course.)

Harmonic Editing is groundbreaking because it allows for this sort of functionality in both MIDI and recorded polyphonic audio, and is particularly useful for the rapid auditioning of chords and chord progressions. With Harmonic Editing, you can instantly hear any chord that comes to mind—and perhaps more importantly, the ones that don’t.

Imagine you’re working on a song, and you find yourself curious how that G7 chord in your turnaround might sound if you substituted it with a Db7. Without harmonic editing, you would need to grab your guitar, tune it, perhaps mic your amp again, check your levels, and then wrangle your mouse and keyboard with a guitar in your lap to re-record your part; fumbling to play guitar and run your DAW at the same time. And then you may find that perhaps you should have left well enough alone. But with harmonic editing, it’s a two-click operation to change that chord to a Db7 and hear it in context. And then, perhaps, a Db7 add11. Whatever you like!

Because many users have been familiar with MIDI editing for a long time now, we’ve done our best to make Harmonic Editing of Audio Events as similar as possible to already-established workflows.

So how does it work? Two technologies in Studio One Professional combine to create our brand of powerful Harmonic Editing: The Chord Track and ARA integration. 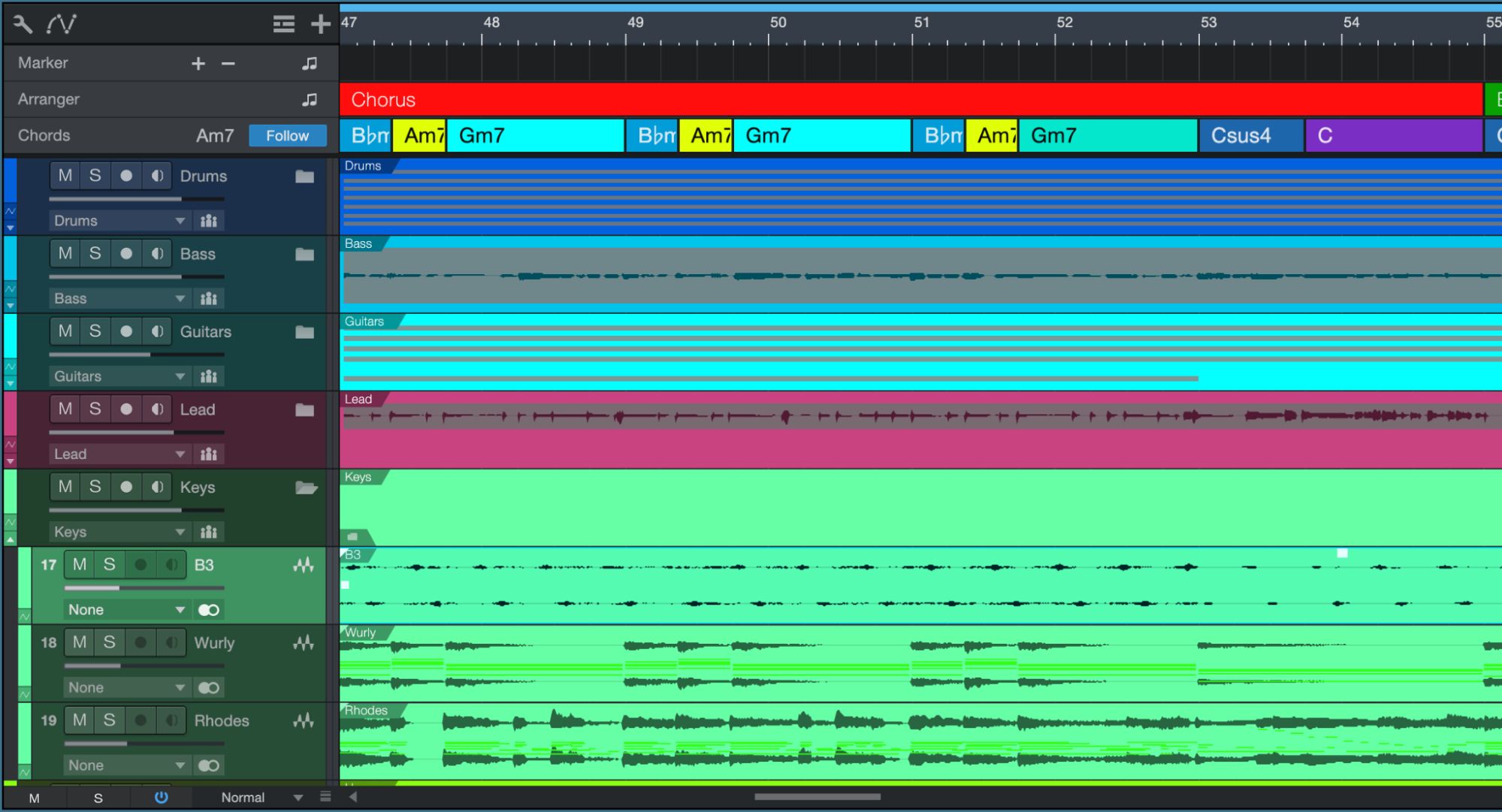 Chord Track allows you to tag/mark/identify sections of your Song with Chord information. Setting both Audio Events and Note Events (MIDI) to Follow Chords using the Inspector panel (F4) will trigger in its notes to dynamically change on playback to match the Chord Track. Chords can be defined by clicking them into the Chord Selector with your mouse, or you can using a connected MIDI keyboard. There are a few different rulesets for Chord Track following that we’ll get into later.

Audio Random Access, or ARA, developed with our partners at Celemony, lets Studio One share more information with plug-ins (Like Melodyne) than was previously possible. Specifically, ARA allows a DAW host and a plug-in to exchange audio data, tempo, pitch, and rhythm for an entire song rather than just at the moment of playback. It’s ARA that allows Melodyne to integrate with the Chord Track, as depicted above, and ARA is also what makes deep integration with VocAlign possible. It’s what allows these advanced plug-ins to perform as if they were native features of Studio One itself.

Before ARA, a user had to simultaneously work (and think) in two independent programs—because the two barely talked to each other.

Before ARA, working with these advanced plug-ins could lead to frustrating production hassles. For example, deleted Events in a Song would still keep playing from Melodyne or VocAlign until the user recorded the respective parts back into them again. Thanks to ARA, Studio One interchanges Audio with Melodyne and VocAlign seamlessly, all the time—enabling blazingly fast vocal tuning- and timing-corrections (Melodyne), as well as sample accurate phrase-alignment of backing vocals (VocAlign).

Thanks to ARA, Studio One Professional was the first DAW to have Melodyne Essential built right in. While perhaps most known for its use in vocal pitch correction, Melodyne allows for many other powerful workflow-improving techniques and applications, discussed further below.

Uses for the Chord Track 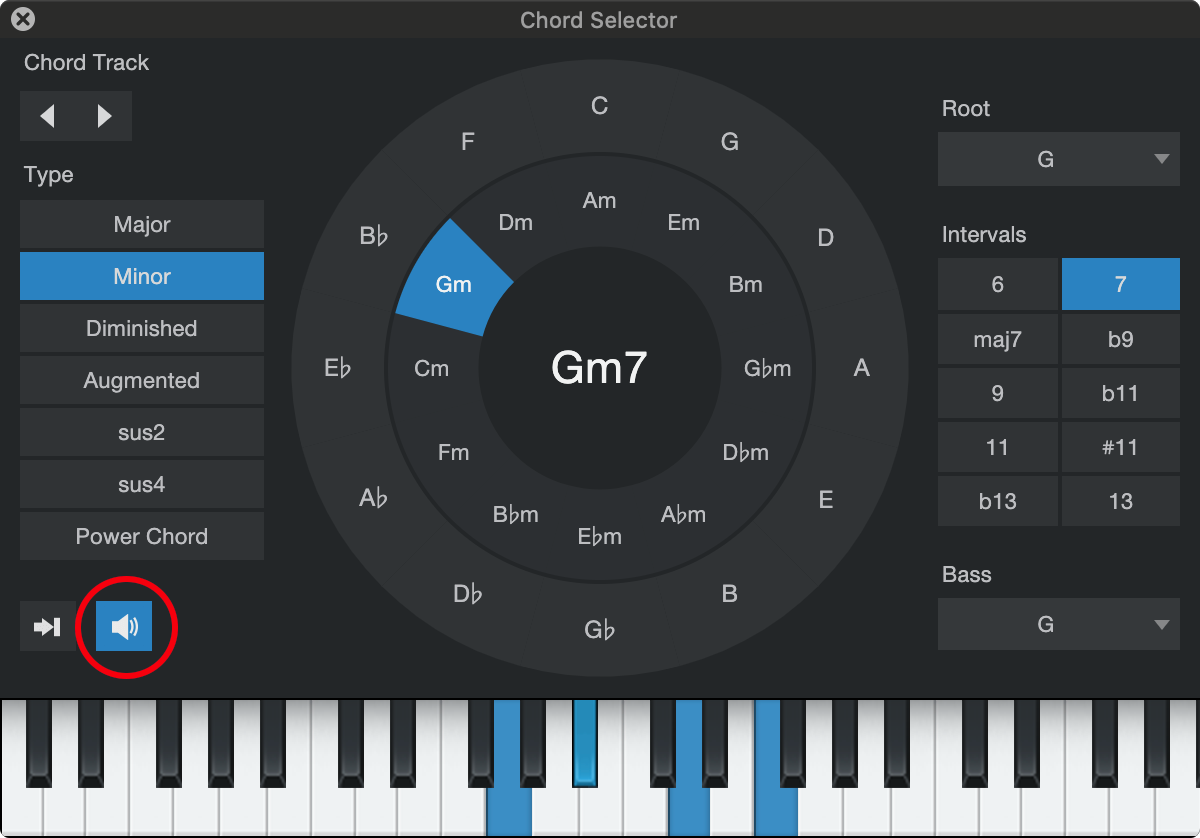 Auditioning new Chords is quite useful for producers who have a strong ear for harmony but are perhaps lacking a formal music education. Simply double-click any section of the Chord Track to open the Chord Selector, and then click the speaker icon to activate the Audition Chords feature. Any changes to the Chord selected by clicking on the Wheel, Type, or other options will sound the chord audibly. You can then step through auditioning each Chord Track section using the left and right arrows (better yet—the arrow keys on your computer keyboard) to hear the Chord Track’s chords in a musical context with one another. 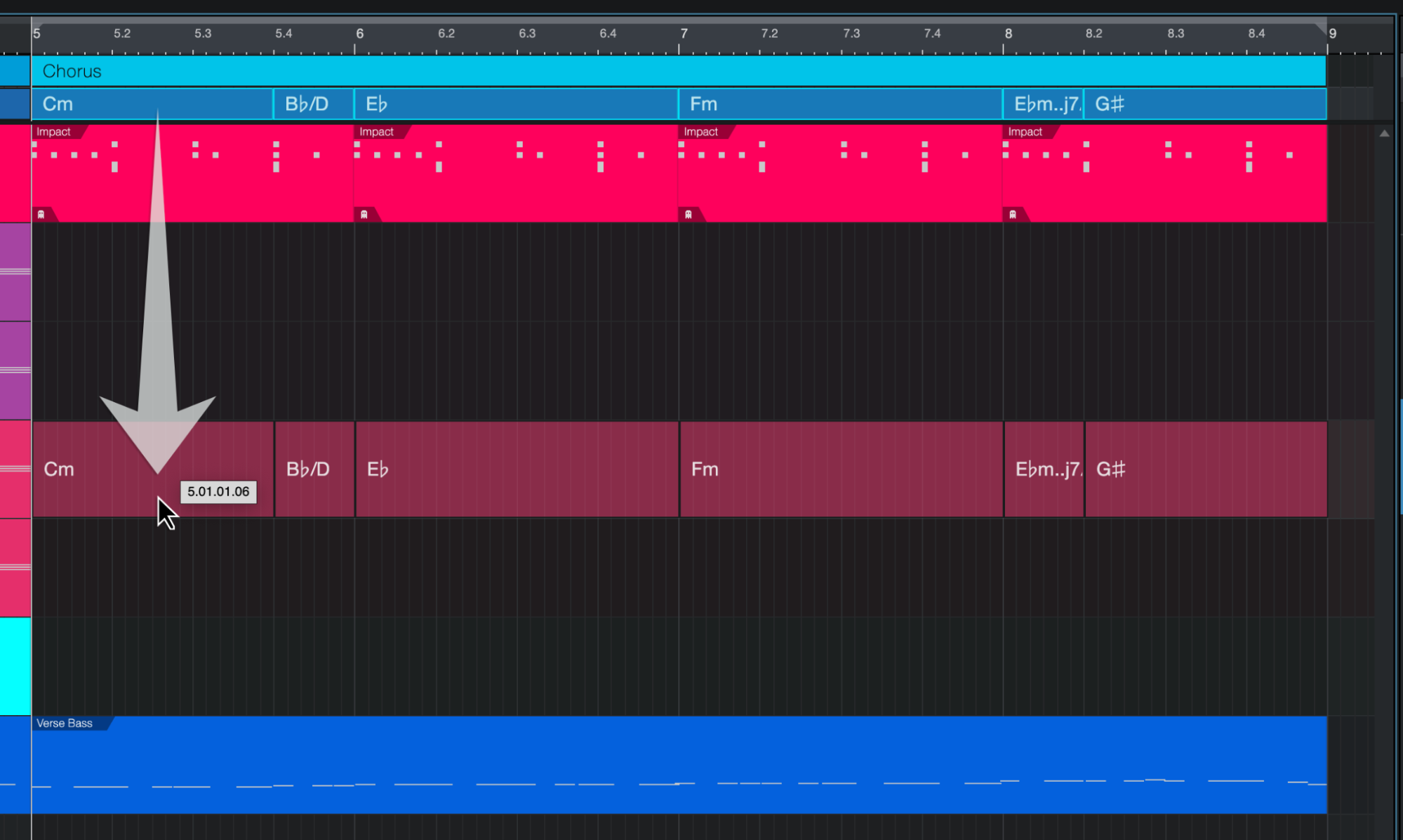 As of Studio One 5.3, you can simply drag ‘n’ drop a Chord (or several) from the Chord Track into an Instrument Track to render a simple MIDI Chord. From there, you can do whatever you like with it, of course. This is a great way to quickly grab some simple MIDI data to begin embellishing and experimenting with. Holding [shift] while double-clicking the Chord Track will quickly select all of the Chord Events—you can drag and drop your entire Chord Track arrangement to an Instrument track at once.

Chord Track notes can also be extracted directly from an Audio Event once its chords have been detected. Simply drag and drop a Chord-detected Audio Event to an Instrument Track to render the desired Note Events in place.

Once you’ve got a Chord Track created, you can assign specific tracks in your session to follow the chord track; note that the default follow setting is “off.” Here's how: If you select a Track with the Inspector shown (F4), you'll see its Follow Chords options. Each of these modes differently affects the manner in which Chord Track Events are interpreted. All of these options are compatible with Audio Events, and three only work with Note Events.

Try this: Experiment with combining different Chord Follow settings on your Note Events while applying the Arpeggiator NoteFX to create new melodic phrases!

Commiting changes from the Chord Track

If you like the effect the Chord Track has had on an Audio Event, simply press [CTRL+B on Windows / CMD+B on Mac] to Bounce your selection to rendered audio and free up some CPU resources. 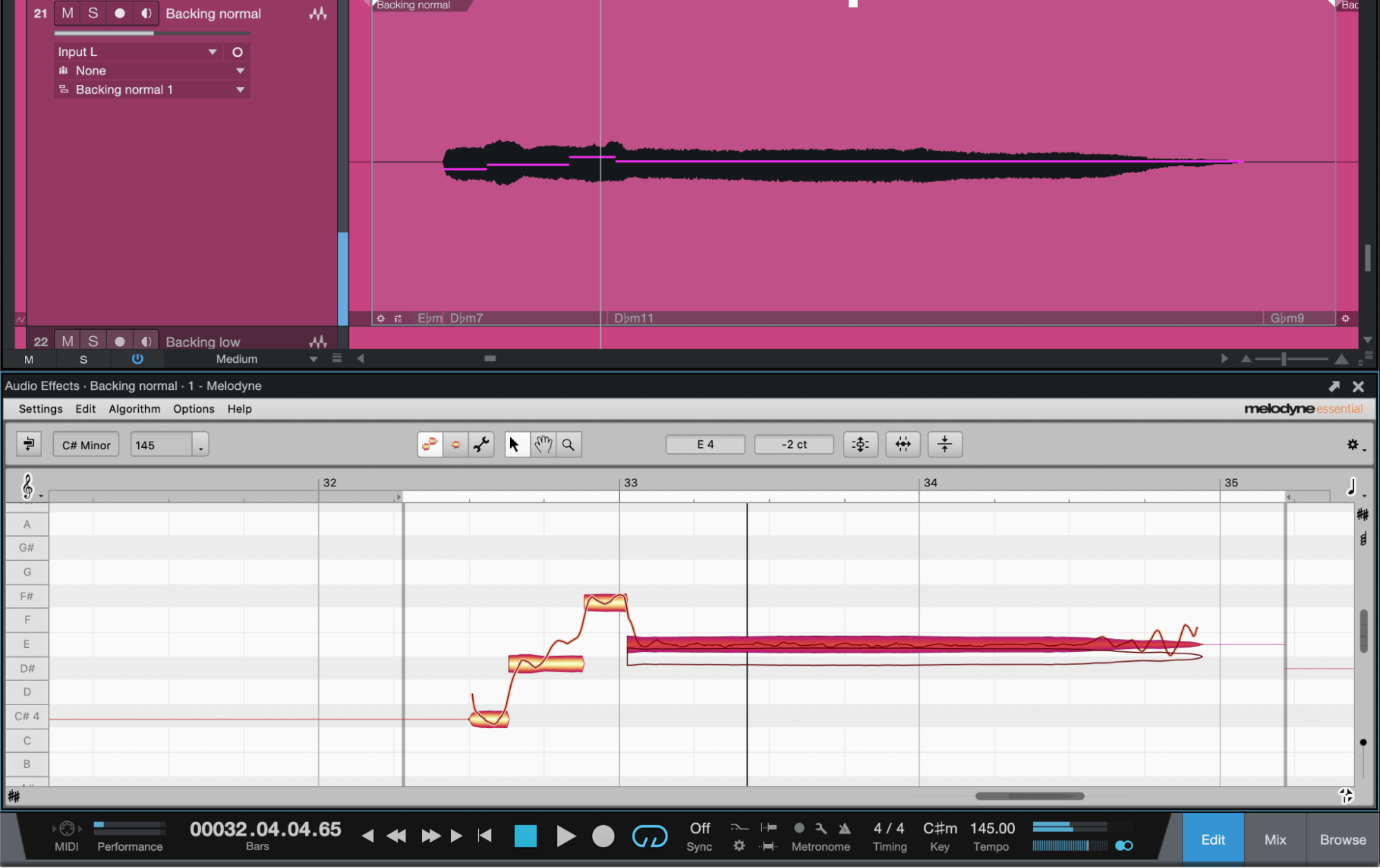 Perhaps the most obvious and certainly the most popular application of Melodyne in Studio One, the included Melodyne Essential grants the user nigh-effortless control over the pitch of recorded audio. You can apply as much or as little pitch (and volume) correction as you like; Melodyne Essential even offers melodic and percussive and detection algorithms.

Vocal pitch correction with Melodyne is a topic entirely worthy of an article all its own, and Celemony has an excellent manual for using Melodyne Essential in Studio One here.

The above makes it possible, for instance, to record a sung melody and then drag the recording to an Instrument Track for a virtual instrument to play, rather than trying to figure out how to play it on a keyboard controller. You might also wish to replace or enhance an acoustic instrument performance with a virtual instrument. These techniques and many more are now possible with a single drag-and-drop.

Try This: Record a melody line with your voice (even humming will do) and then extract the note data from your vocal recordings as described above. Next, audition a few different presets in Studio One’s Presence XT until you find a sound you can’t live without!

Editing of Polyphonic Audio in Melodyne Essential is limited

Melodyne Essential 5, bundled with Studio One Professional, is ideal for editing rhythmic and monophonic sources like vocals. While you can use the Melodyne Essential to apply pitch and rhythm manipulations on polyphonic material (such as re-pitching entire guitar or keyboard parts, or whole mixed songs), you won’t be able to select the individual notes out of polyphony for editing by hand without an upgrade to Melodyne Editor or Studio. Alternatively, you can use the Chord Track to apply new chords to polyphonic data in your Audio Events, but you won’t be able to select and manipulate individual notes by hand.

While you can enter the Key Signature of your choice manually, of course, ARA also makes it possible for Studio One to deduce a Song’s key signature by analyzing the audio. Try it by right-clicking on an audio event and choosing “Extract Key Signatures from Event.”

Thanks to the Signature Track, songs can have as many Key and Time Signature changes as you’d like. 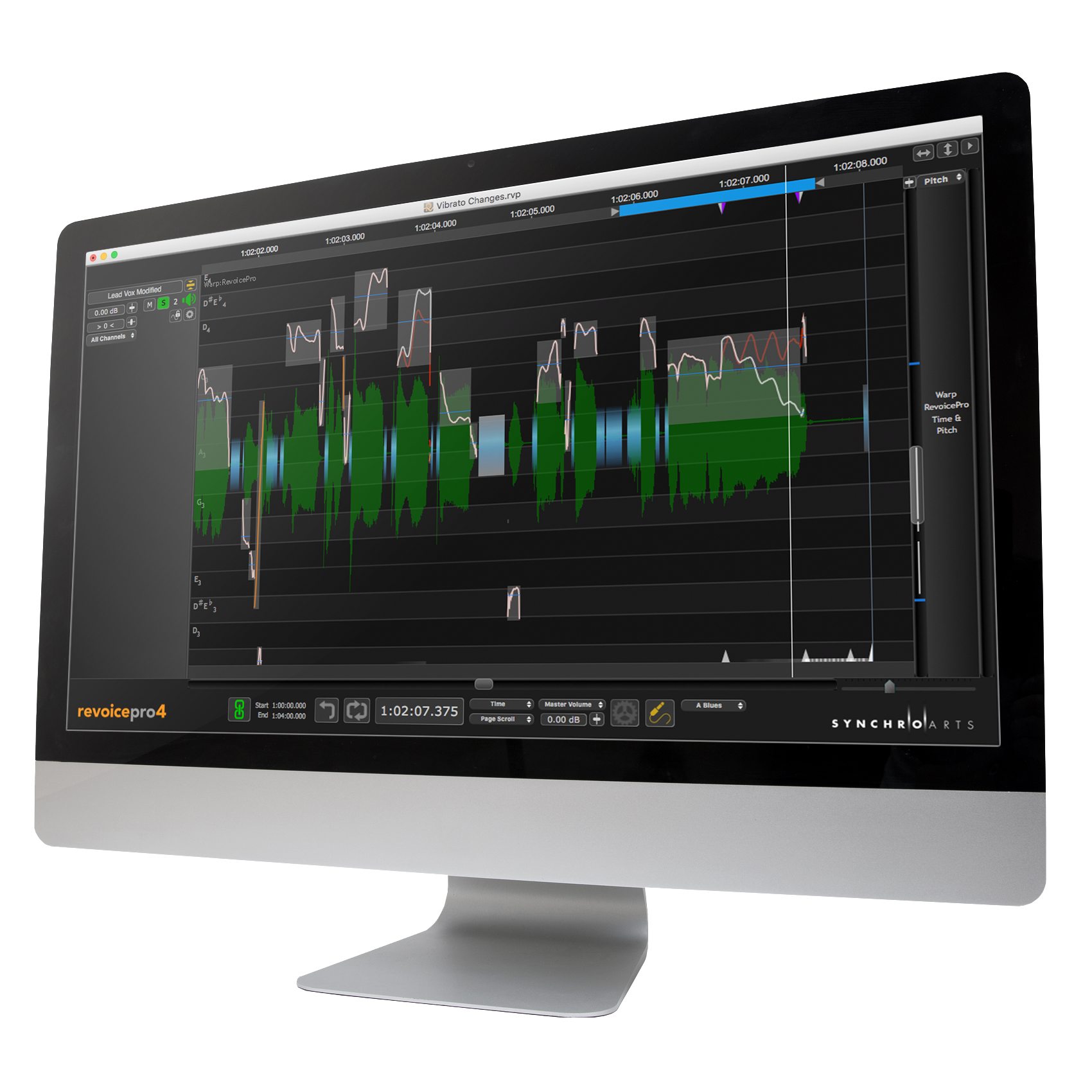 These two plug-ins from Synchro Arts take full advantage of Studio One’s ARA integration to create some formidable audio tools. The VocALign products are intended for use with lining up backing vocal parts to the original performance, eliminating the need for painstaking micro-edits done by hand. ReVoice is capable of some astonishing post-production techniques, including the patented Audio Performance Transfer (APT). APT allows you to clone the timing, pitch, vibrato and level features of one audio track—and apply them onto another; useful for creating perfect time alignment and lip sync for dubbed film dialogue.

ReVoice and VocALign are available at shop.presonus.com.

We’ve assembled a list of video assets on the Chord Track, Melodyne, and more below. Enjoy!