Getting Started with Gain Staging

Getting Started with Gain Staging

Setting up your audio equipment to maximize the input signal and minimize the inherent noise is arguably the most important step in optimizing its sound quality. PreSonus® has put together this brief tutorial to help you to understand how properly set input levels throughout your signal path, as well as how to avoid some of the most common misunderstandings and pitfalls.

The Ins and Outs of Signal Flow

The first part of understanding how to configure your signal levels is to understand how audio signal functions within an audio system. It should be noted that signal flow is the same whether you are recording into a simple handheld SD recorder or setting up a complex live sound system for broadcast and redundant recording.

The first step is to understand the components of your system and how they relate to one another. Let’s take a look at a basic signal chain. In the example below, we have a microphone connected to a preamp on a StudioLive AR-series mixer and back out to an AIR10 powered loudspeaker.

In this simple system, there are actually eight gain stages. That is, there are eight points at which the signal passes through an amplifier:

It should be noted that our example diagram assumes that you don’t have a compressor, gate, or other processor connected as an insert somewhere. These processors also contain their own gain structures that need to be accommodated. For simplicity's sake, our example also will not consider Pan Law.

With so much potential for gain, even in the simplest of examples, it is critical to examine each stage, from the source all the way to the output.

The goal at each stage of structuring your system gain is to maximize headroom, without clipping, so that the noise floor of each component is exceeded by the signal. As you add more gain stages to a system, this becomes increasingly important.

The first step is to understand the upper and lower boundaries, both of which can negatively impact the quality of the audio at each stage in your audio chain. At the bottom of the signal, you’ll find the noise floor of each component. Every audio component, no matter how high its quality, will have some inherent noise. The level of this noise is produced by the device itself. For analog devices, this level is documented in the signal-to-noise ratio in the audio specification. This ratio determines the level the input signal must exceed to overcome the device’s noise.

Gain Staging 101: Begin at the Beginning

It may seem counterintuitive to boost the signal closest to its source and cut it later in the signal path if it is too loud, but this is precisely the best way to get a noise- and feedback-free recording or show. That said, you don’t want to gain it up too much at the beginning either. If you find that you must cut the signal at every component that sits after the input-trim stage to avoid distortion, you’ve probably set the trim too high. Then, and only then, should you gain it down. 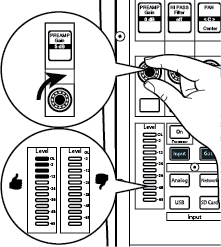 Turn the trim knob on your microphone channel clockwise while watching for the signal/clip indicator to turn red, then back it down until the indicator is green only.

How high you have to turn the trim knob depends on several factors: the volume of the source, the sensitivity of the microphone (if the source is miked), the maximum input and gain range of the preamp, and the gain curve of the potentiometer. Let’s take a look at each of these factors in more detail:

Step 2: Setting the EQ and Dynamics

After you have set the input gain, you can use your channel EQ to sculpt your source. The more bands your EQ offers, the more control you will have, but you’ll also add more potential for improper gain staging, so use with caution. This is also true if your mixer offers a compressor and other dynamics processing on the channel, as with the StudioLive® Fat Channel, or if you're adding in a dynamics plug-in in your DAW application, like those available in Studio One®.

To set the EQ, you will need to adjust both the channel and the main faders to unity. This is just for the purposes of dialing in the sound you want. You’ll dial in the mix next.

Often, when people are new to using an equalizer, they listen for what is missing from their source signal and try to boost it in. Let’s take a common problem: the kick drum.

You want the kick drum to be big and bassy, so you cut all the highs and mids and boost up the low bands as much as possible, right?

Maybe not. Sometimes, it’s what you remove that filters out the frequencies that are overwhelming the sound that you want to hear.

More information on instrument and EQ frequency ranges can be found in the PreSonus EQ Frequency Guides.

Dynamics processors can be difficult to work with at first because they both reduce gain and amplify it. Let’s take a look at a compressor for a moment. A compressor works by lowering the dynamic range — and by extension, the gain — of a signal, but it also gives you a make-up gain control that allows you to get some of that back. If you apply a lot of gain reduction to a signal, then boost it too far with the make-up gain, you are essentially amplifying a laser, and it can get very unwieldy very fast, especially if you have done the same thing across multiple channels. As with an EQ, only compress a signal as much as you need to, unless you’re using it for an effect, and only gain it back up as far as you have to for it cut through the mix.

More information on compressors can be found in the PreSonus Brief Tutorial on Dynamics Processing.

Once you have gone through each channel on your mixer and properly set the trim, EQ, and dynamics, then you can dial in your mix with your faders. 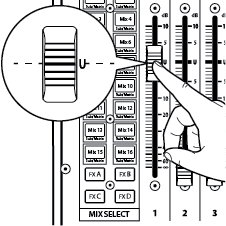 There is an unfortunate rumor that exists in the dark reaches of the audio Internet that all your faders should be set to unity, and you should be essentially mixing on your trim knobs. But if you do this, you will limit the dynamic range of your instruments—and not in a good way.

That big ‘U’ next to your faders means just one thing: The channel and output mix level controls are not adding or removing any amplitude to or from your signal.

Why do you need to know this? For input gain staging and dialing in your EQ and dynamics!

With the channel and the main faders at unity, you can listen to an individual channel unadulterated while you’re setting your input gain level and adjusting your EQ and dynamics to sculpt the sound. Once that’s done, that ‘U’ mark has largely served its purpose. Are you getting too much bleed from the kick drum on stage and need to lower the kick microphone’s channel by 30 dB? By all means, go ahead. Need to give the guitarist’s channel a little gas while she’s playing a solo? That’s what that 10 dB above Unity is for.

Like everything in audio, however, these rules aren’t absolute, especially in a live sound situation. If you are gaining up a channel well above unity just for it to be heard in your mix, maybe your other channels are too loud. Try lowering the levels of the rest of your mix.

Adjusting the level between your Main output and your speakers can take a little work to find the right balance. As a rule of thumb, set your Main output level fader so that the Main Output meters on your mixer are consistently below the red 0 dB light. If this light is coming on, especially on a digital mixer, you are overloading the circuit and/or the converters and are going to hear distortion.

Once you’ve set your Main output level, adjust the level of your speakers’ amplifiers (onboard or outboard). In the case of powered loudspeakers like the PreSonus AIR series, you will need to set an input and an output level. As with your mixer, set the input level first, so that you have a good level without distortion, and then set your output level until your speakers are loud enough but are not overdriven.

More information on selecting and configuring loudspeakers can be found in the PreSonus Brief Tutorial on Loudspeakers. 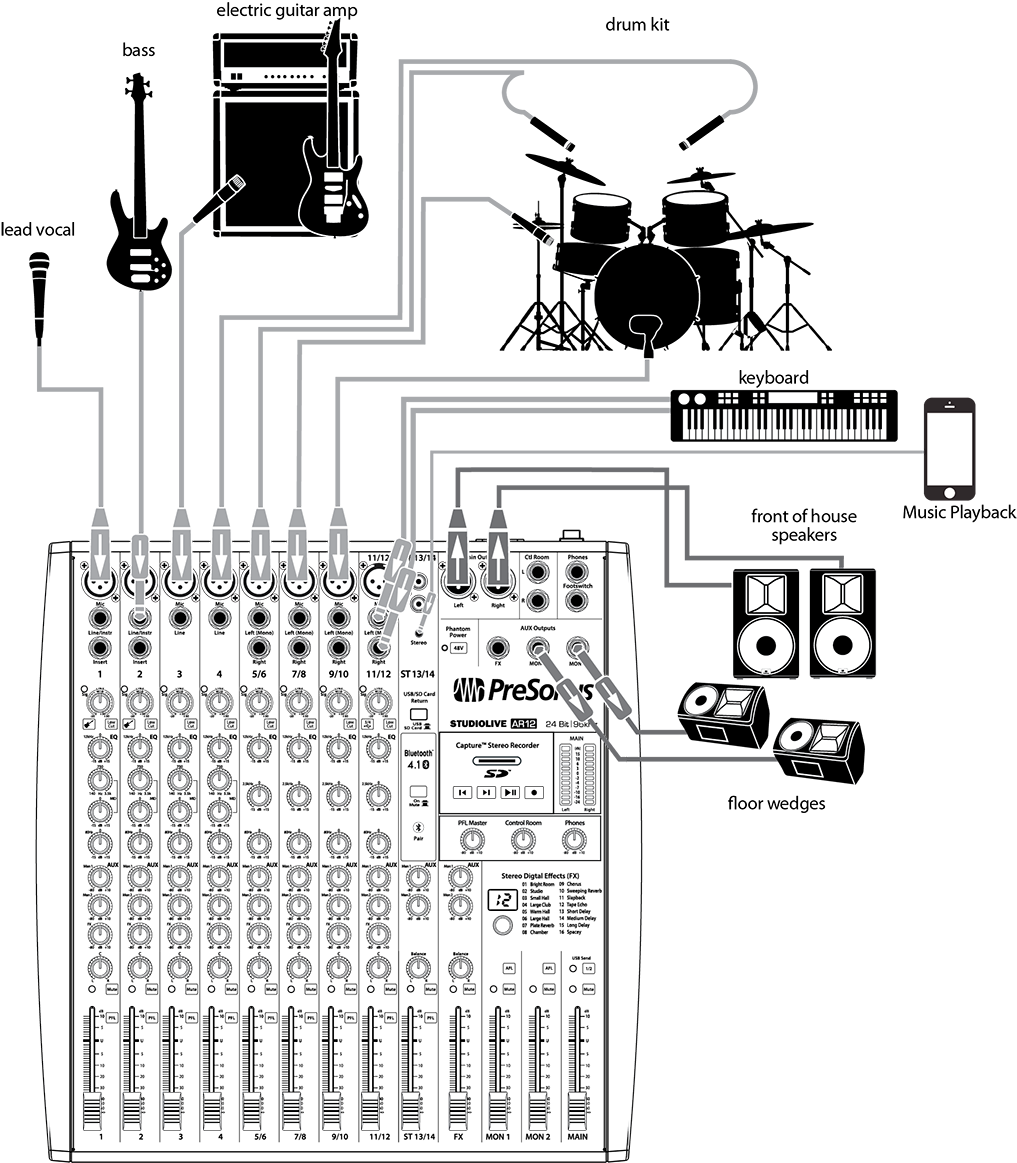