Dithering in Studio One

Dithering in Studio One

Despite dithering’s commonplace use in mixdowns and exports in the digital audio realm, it may rank as one of the practices that is the least well-understood. Let’s take a minute to look at what dithering is, exactly, why it’s used, and why you should care.

Dithering is the practice of — perhaps counterintuitively — adding noise to an audio file during a bit depth conversion. While audio purists may initially balk at the notion of deliberately adding noise to their meticulously recorded productions, dithering employs a low level noise that is generally imperceptible when included in a full mix. A common example of bit depth conversion would be exporting a mixdown of a song produced at 32-bit downsampled to a 16-bit .WAV.

Which, of course, begets the next question: why add something to your music that you can’t even hear? Nobody adds invisible paint to a canvas, and when was the last time you read a book with invisible words added?

The goal of dithering is to reduce the harsh-sounding audible artifacts that can otherwise occur during a bit depth conversion—without dithering, reducing a file from 24-bits to 16-bits simply deletes eight bits, resulting in an abrupt, potentially terrible-sounding loss of data. Many DAWs (Studio One included) are capable of recording, mixing and mastering at much higher quality than the 16-bit, 44.1 kHz CD audio standard that is also employed by streaming services like Spotify, Apple Music and others. While that standard dates back to digital audio’s pioneer days (1980), it’s still a relevant standard that any audio pro should be savvy to.

Studio One can record audio with 16, 24, 32, or 64-bit (floating point) resolution. Recording at a high bit depth in Studio One ensures the maximum quality possible during music creation and mixing. But as you may have found, the file sizes of high bit depth audio files aren’t exactly portable, making them a potential burden on your listener’s disk space and unsuitable for many streaming services. So, we downsample and dither in the name of making our music as accessible to as many people as possible while still sounding great. While high resolution, high bit-depth audio has a dedicated and vocal following, the majority of your listeners will be enjoying your productions using services or devices that don’t support this. 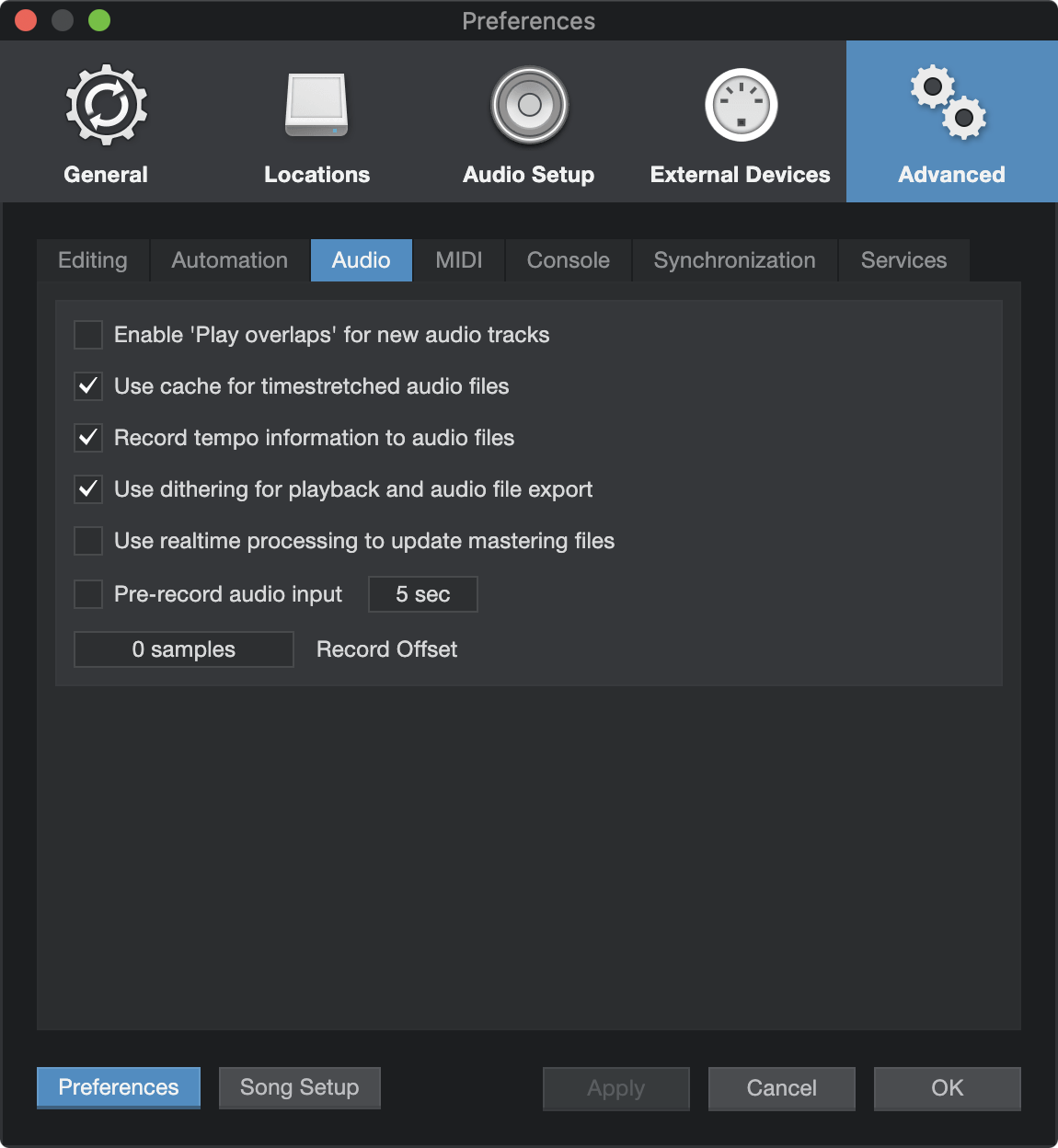 If you’re interested to hear an extreme example of what a bit depth conversion sounds like without dithering, try this tip courtesy of Craig Anderton:

While exporting a song at -80 dB may seem ridiculous at first, it also serves to illustrate the low volume levels at which dithering is applied. Normalizing the undithered track brings the bit depth conversion levels back up to an horribly audible level.

Now — repeat the above process with dithering turned on. The resultant file will include audible dithering noise, but be much more listenable.

How is Studio One’s dithering different?

This state-of-the-art high-end algorithm is a highpass-tri dither with 9th order psychoacoustic noise shaping (F-weighted). In other words, we're using cutting-edge technologies to suppress audible quantization artifacts while at the same time preserving as much of the high-resolution information as possible. If you want to go deeper, open up the “Technical Details” section below.

Upon reduction of bit depth, an error is introduced: the signal in the output format is not equivalent to the source format. The added error signal has a strong correlation (=dependency) on the music signal — which is a bad thing. With the added dither noise, this dependence is removed.

Reducing the bit-depth and adding dither introduces a noise floor. Noise-shaping is a common technique to shift this noise to frequencies where it is less annoying (typically in high frequencies). The noise is still there, with the same energy, but it is perceived as being less disturbing.

What is the meaning of F-weighted?

Also known as Fletcher–Munson curves or Equal-loudness contour, F-weighting replicates the sensitivity of human hearing to different frequencies. With F-weighted noise-shaping, all noise is shaped in such a way that it is perceived as uniformly weak over the entire audible frequency range.

Why should I care if bit depth conversion artifacts occur at such low levels?

Conversion artifacts are much more evident in productions that have a broad dynamic range, and can commonly worm their way into reverb tails at the end of a song.

Dithering is the best way to ensure your productions aren't marred by artifacting during the bit depth conversion process; and that conversion is an important step in the optimal preparation of your music for distribution in today's complex digital landscape.

Studio One’s custom dithering algorithm is state-of-the-art — because your music deserves nothing less.