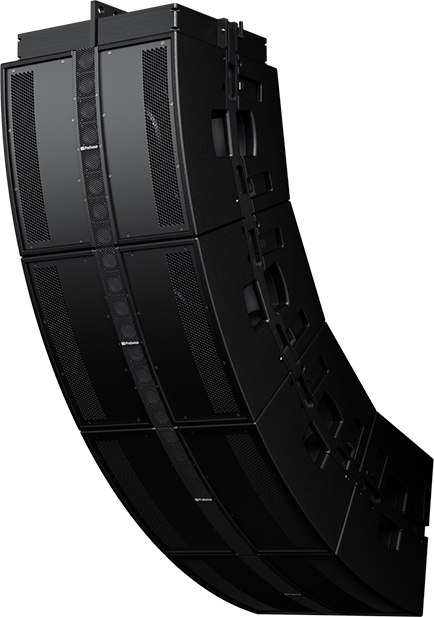 The PreSonus CDL12 loudspeaker combines the best attributes of point source and line array technology into a patent-pending design that results in clear, articulate speech intelligibility and natural music reproduction. This article will go in depth into the details of what makes PreSonus CDL-series loudspeakers so unique.

Before we discuss Constant Directivity, let’s take a moment to explain what ‘directivity’ means as it relates to loudspeaker design. With any loudspeaker design, there will be changes in frequency response when the user is listening on-axis, within the loudspeaker's nominal coverage area as compared to when they are listening off-axis outside of it. Directivity describes the directionality of a sound source and is closely related to how a loudspeaker’s frequency response changes both inside and outside of its designed coverage region.

PreSonus and WorxAudio loudspeakers are good examples of wide directivity designs. That is, they maintain a consistent SPL throughout the frequency response range both on- and off-axis. By contrast, narrow directivity loudspeakers will display quite different sound pressure levels once one steps outside the coverage pattern.

Creating wide dispersion throughout a speaker’s bandwidth presents a design challenge since as frequencies go higher, their wavelengths shorten, which can dramatically narrow the dispersion. At low frequencies, loudspeakers tend to radiate consistently in all directions but at higher frequencies, they tend to beam the sound. So, a conventional loudspeaker that is relatively flat on-axis radiates a different frequency spectrum when heard off-axis because the response is no longer frequency independent.

This means that a shorter wavelength, say at 3 kHz, that radiates in a very narrow beam may no longer be easily heard when you step out of the coverage area. This may not seem like a big deal until you look at what types of sounds are reproduced at that frequency: the clarity of a vocal, the attack of an acoustic guitar, the “pluck” on a bass string. In other words, as you move outside the coverage area in this example, the sound reproduction will begin to lack clarity in this situation.

PreSonus ULT-series loudspeakers solve this problem by employing a relatively large horn design with the Pivot X110 horn. This proprietary design achieves a wide (110˚), consistent horizontal coverage, while narrowly focusing the coverage in the vertical (50˚) so that the high-frequency content has a longer throw at a very wide angle. The resulting pattern expands with constant spectral content throughout the coverage area and all the way to its edges.

As you might have guessed, whether housed in a line array or in a point-source loudspeaker, the horn of a loudspeaker is responsible for its directivity. A well-designed horn will guide the audio waves, spreading out the higher frequencies in a consistent pattern for consistent results.

Constant Directivity essentially means that the directivity and coverage is the same from the lowest frequency to the highest within the frequency response range of a loudspeaker. And it’s consistent in both the horizontal and vertical planes both in frequency response and SPL. PreSonus CDL12 loudspeakers deliver on this promise by combining the best of both line array and point source designs.

Let’s take a look at both traditional approaches. 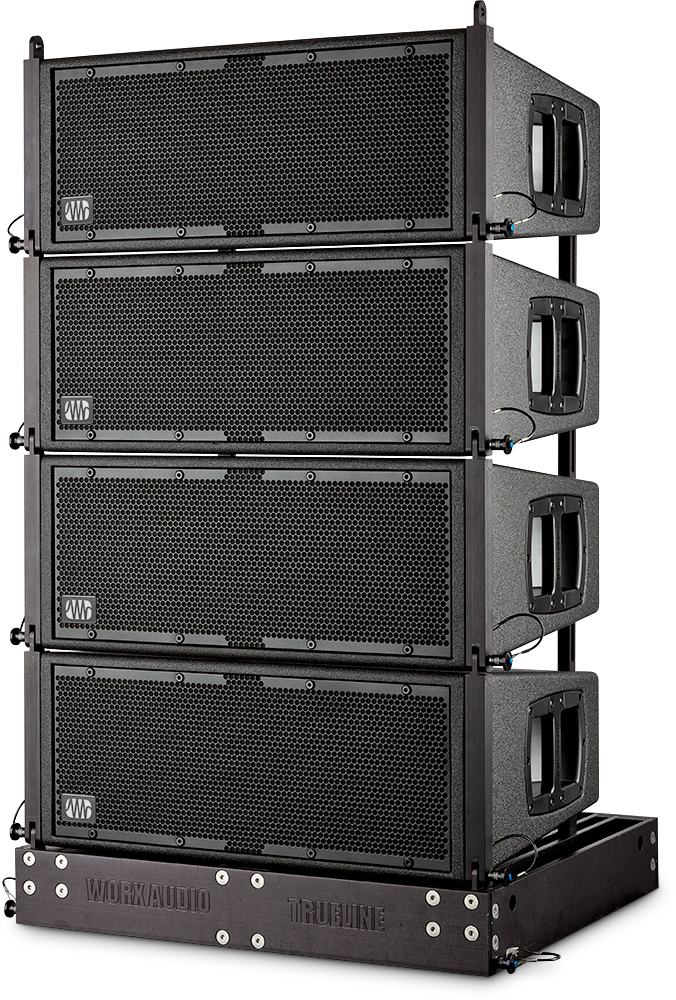 A line array is created by suspending multiple speakers in a straight or curved vertical contour. Instead of a single horn and woofer, multiple drivers are stacked, one top of the other to create a line source. Line arrays must be installed in a venue where they can be hung high enough to accommodate many enclosures. They are often used for festivals and other large-scale events or in very large venues because these applications facilitate the height necessary to suspend enough speakers together to cover the desired audience size. This also eliminates the need for delay speakers because a line array can be designed to provide coverage to even the farthest listeners.

In recent years, line arrays have also become popular in venues with complex acoustics because of the ability to steer the sound, aiming at the audience and not where reverberant environments can play havoc with it. Another benefit for churches and corporate events where speech intelligibility is critical is that a line array can be designed to accurately cover the audience and provide an optimal listening experience because of their consistent SPL performance.

Line arrays work by vertically aligning different speakers facing at slightly different vertical angles; this is what allows them to cover a greater depth of field with the same SPL. Because vertical dispersion per speaker in the array is so small (usually 10˚ to 20° of vertical coverage per enclosure), you may need many enclosures to cover a normal listening area of 60˚, for example.

Because the arrayed enclosures create a line source (as opposed to a single point source), a line array radiates in a nearly cylindrical pattern. A very tall, true line source will suffer from half as much propagation loss as a point source. To understand what that means, we must explain Inverse Square Law as it relates to loudspeakers. 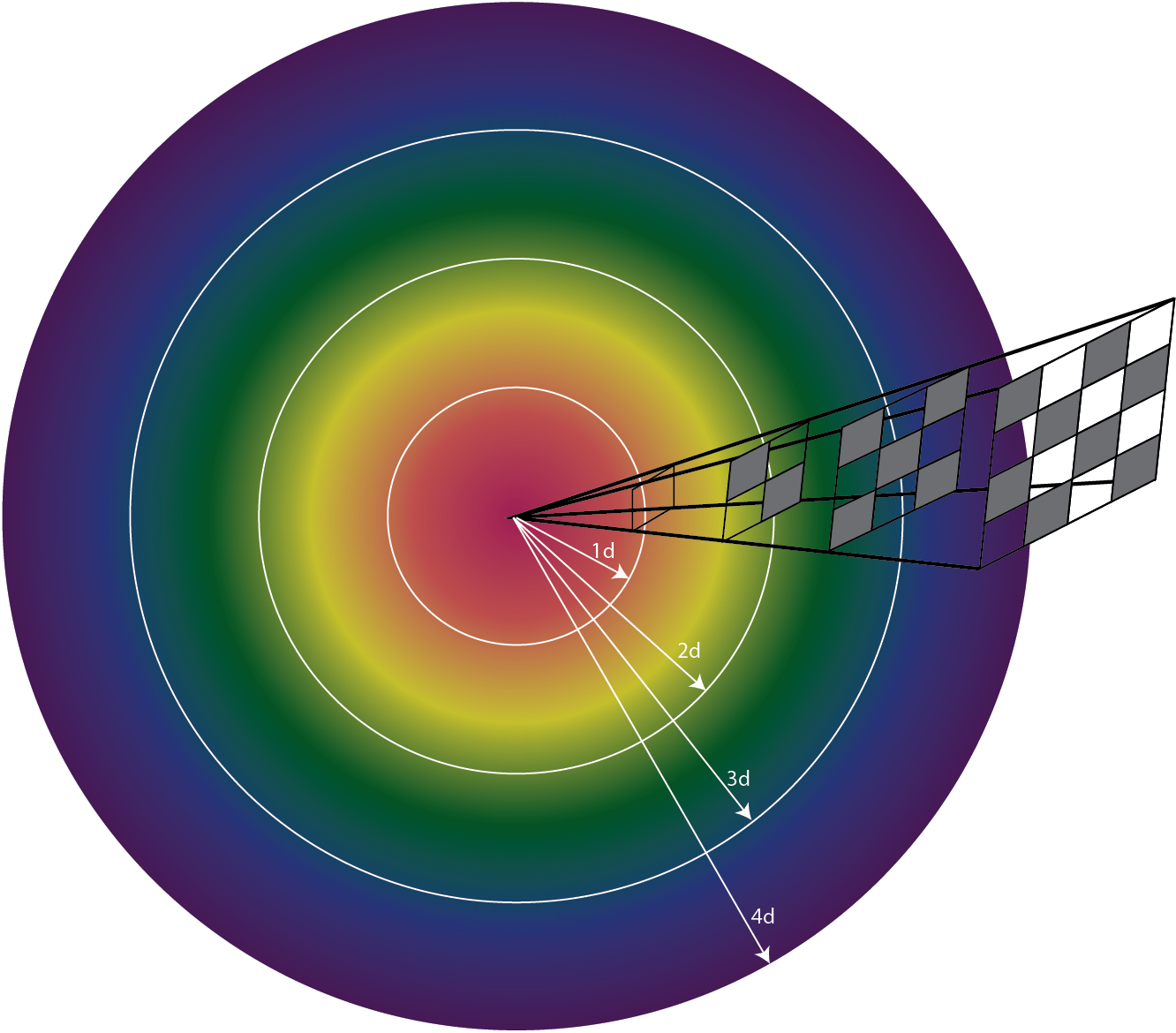 The Inverse Square Law states that a SPL will decrease at a rate of 6 dB per doubling of distance as sound radiates out from a point source in a free field. This means that if the SPL of point source loudspeaker is 100 dB when measured one meter away, it will measure 94 dB when measured at two meters, 88 dB when measured at four meters and so on. Please note that this law is based on measurements taken in a free field, not where audio waves are interacting with reflective or absorptive surfaces. This occurs because sound radiates in an omnidirectional pattern from a point source. Since it is expanding out both vertically and horizontally, the sound pressure level will reduce rather quickly as the sound spreads out like ripples in a pond that’s been disturbed by a pebble, only sound waves radiate out in three dimensions. 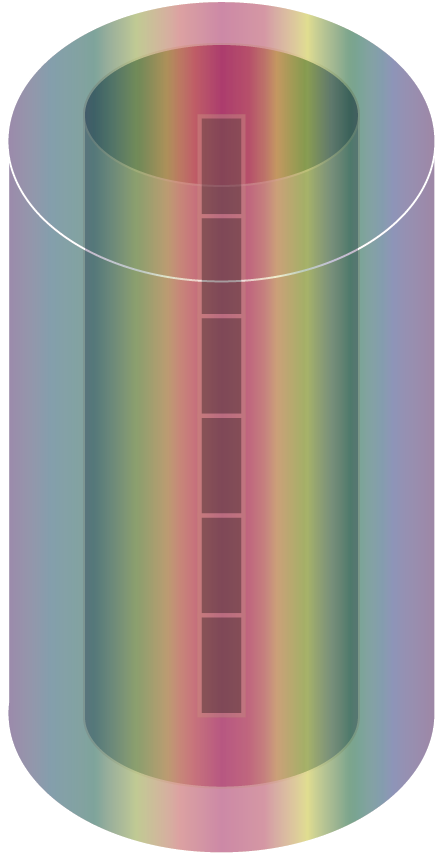 By contrast, a line source radiates in a nearly cylindrical pattern that spreads rather wide in the horizontal plane, but quite narrow and controlled in the vertical. So, the propagating sound waves don’t disperse as quickly and thus maintain a more consistent sound pressure level throughout the space. In other words, if the array is designed properly, the level near the front of the audience will be approximately the same as the SPL level near the rear.

All that sounds great, but it does have its limitations. While line arrays are great at creating an equal sound pressure level from the front of the audience to the rear, they often don’t do a great job at creating the same frequency response at the varying distances in the listening field. Unless properly designed, the performance of a line array is very much frequency dependent.

Array design has to juggle many parameters including:the vertical and horizontal spacing between each driver, cabinet splay, as well as the array length as it relates to frequency length. Unless all these parameters are chosen correctly, the array can exhibit significant variations in frequency response within the listening area. This means that while people standing fifty feet from the stage may be having the best concert listening experience of their life, their friends standing thirty feet closer or further away can barely hear the guitar.

Improperly designed arrays can exhibit many problems. For example, as you get closer to and directly beneath a line array, you will find an increase in frequency range anomalies as you are now listening to the array at a severe vertical angle. At this point, driver spacing becomes problematic, creating nulls and lobes below the array. If you were standing directly above it, you would find a similar response characteristic. Most line arrays sound most consistent at distances much greater compared to height of the array. This places listeners in the far field, where the natural interference between multiple sound sources, and diffraction settles down so that sound radiation is much more uniform.

So maybe conventional line arrays aren’t always the solution. This brings us to the traditional point source approach. The advantage of well-designed point source solutions is that they provide excellent pattern control in both the horizontal and vertical planes. And, although they are not as good at consistent SPL coverage from the front of the room to the rear, the frequency response remains consistent wherever you are within the coverage zone. To solve the issue of propagation loss, delay systems can be added throughout the venue, creating natural transitions from one speaker’s zone to the next.

Delay systems are a great solution to the problem, but require complex alignment and tuning to maintain phase coherence between the multiple delayed systems. Creating a continuous listening experience from the front of the audience to the rear using delays requires quite a bit of technical know-how and advanced speaker processors to accomplish.

But what if our loudspeaker system could provide consistent SPL and consistent frequency response throughout the audience area?

This is where constant directivity and the PreSonus CDL12 comes in.

CDL12: The Best of Both Worlds 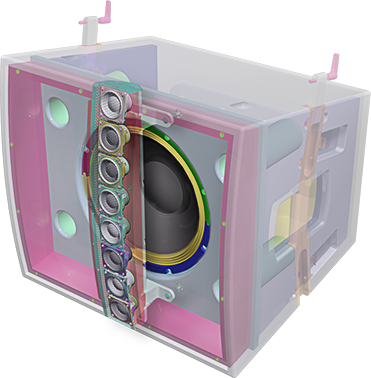 Rather than relying on a single horn, like a point-source, the CDL12 is equipped with eight 2-inch drivers aligned in a segmented constant-curvature arc to create a single high-frequency array. This creates a pseudo point-source array with a performance similar to that of a well-designed horn, but without requiring compression drivers, allowing it to be crossed over at a lower frequency. In this way, the CDL12 improves on the point-source listening experience by placing the crossover point below the complete vocal range at 420 Hz.

The center of each driver is carefully located on a constant-curvature contour so that they are equidistant from one another and from a central common curvature center. This high-frequency array is then centered in front of a 12-inch woofer, forming essentially a point-source configuration. Because the output of the low-frequency driver travels from the same acoustic axis as the high-frequency driver, the pattern always effectively radiates from the center of the CDL12.

This avoids the issues that plague traditional line arrays because it forms a true constant-curvature line source that allows the sound to propagate from the source so that the frequency response and SPL are consistent throughout the coverage of the CDL12 system. This behavior is the same whether the CDL12 is used individually or as part of an acoustically coupled vertical array.

If you’re thinking that the constant-curvature array in a CDL12 performs a lot like a horn, you’re spot on. While it functions like a traditional point-source horn and provides consistent 120˚(H) x 20˚ (V) dispersion, it avoids traditional compression driver problems and can also be crossed over at a much lower frequency. Being array-based the CDL12 suffers much less from Inverse Square Law SPL rolloff where the SPL drops by 6 dB each time the source-to-listener distance is doubled. 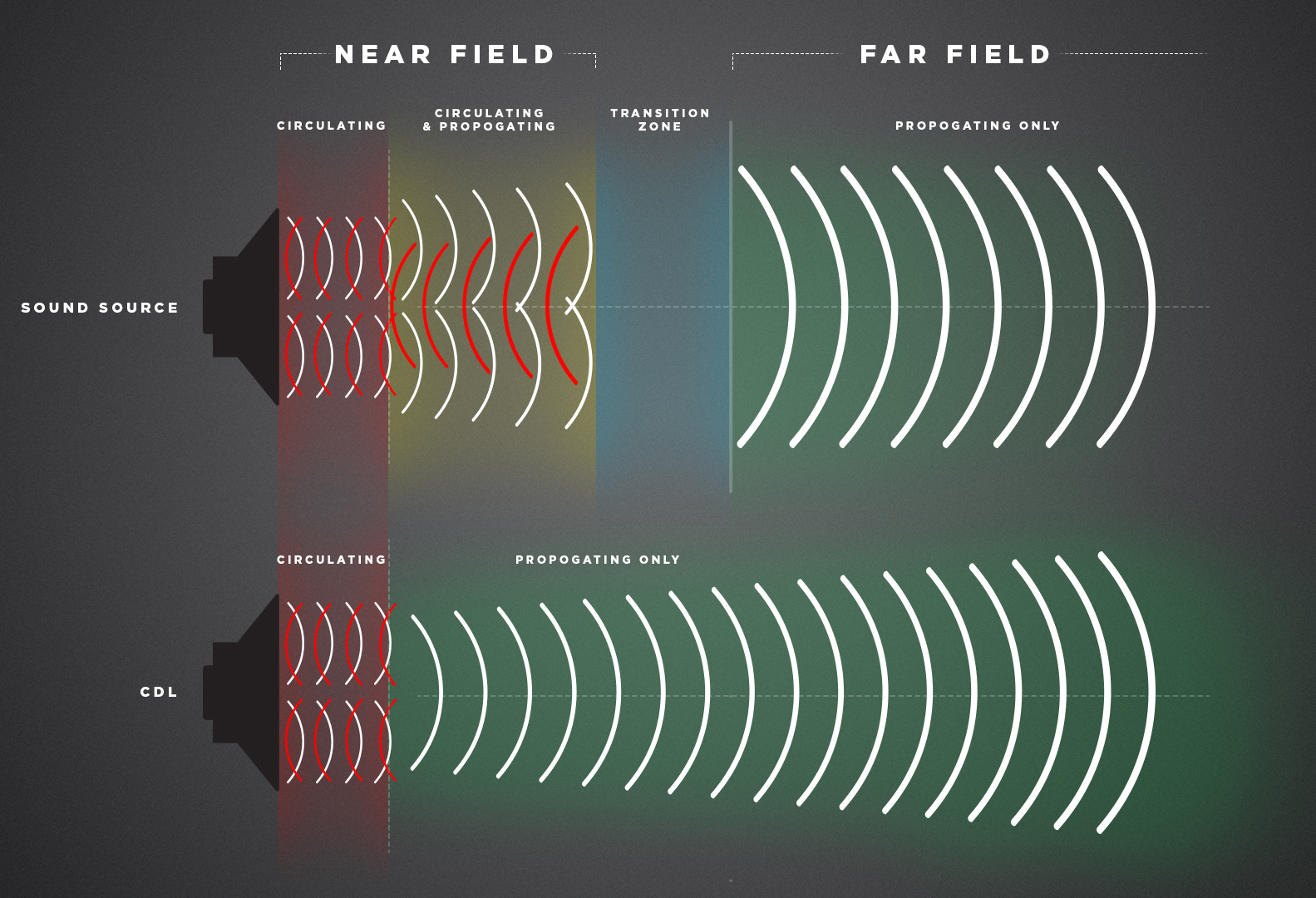 Because the high-frequency array and 12-inch woofer are on the same acoustic axis, the CDL12 behaves more like a well-designed coaxial speaker in this regard. Effectively, every frequency that the system radiates originates from common central point and thus creates a near- and far-field response behavior that mimics the behavior of a true point source. This behavior is true for a single CDL12 or an array of CDL12s, making the CDL12 at home in shallow as well as deep venues for greater flexibility. 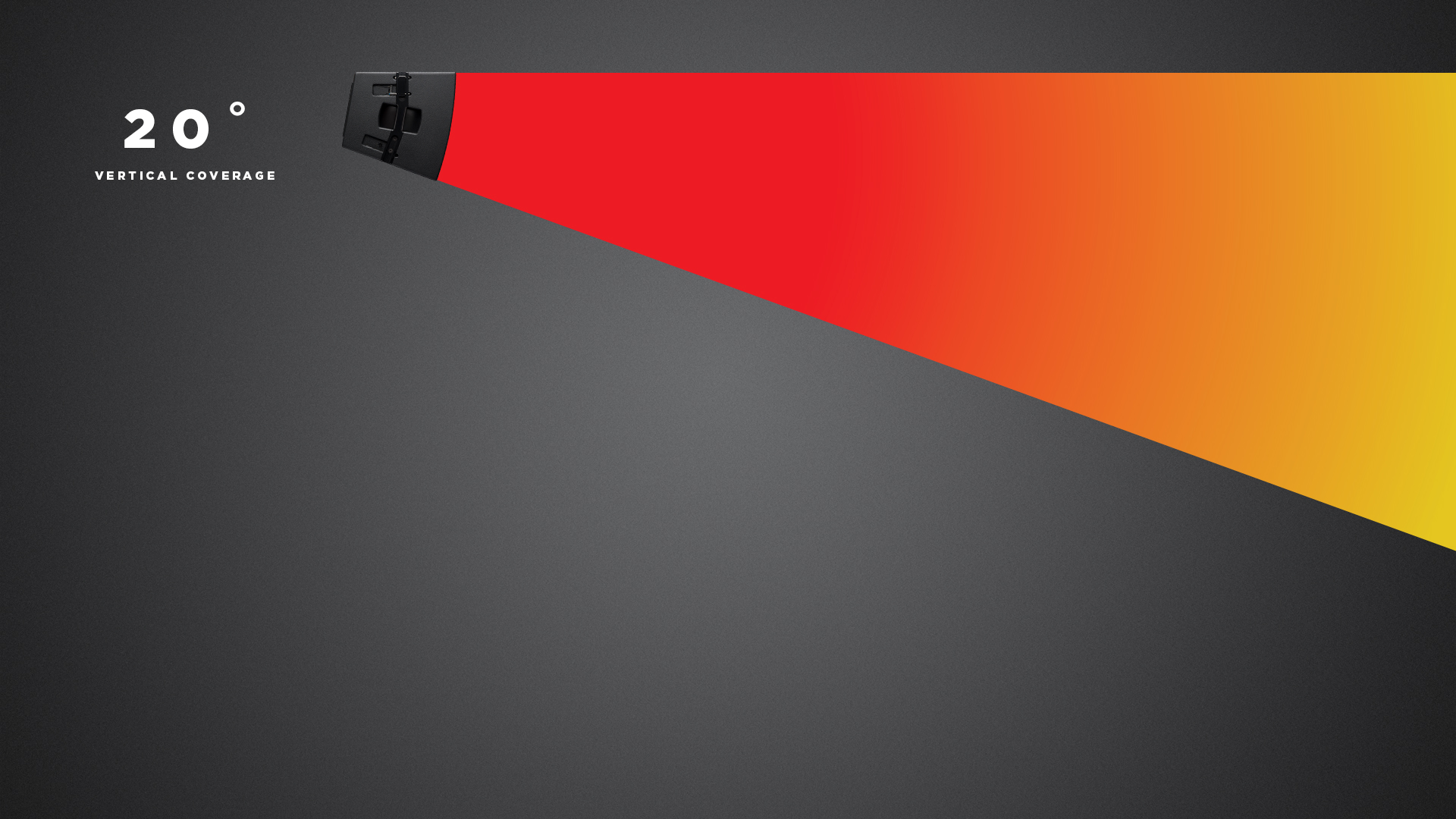 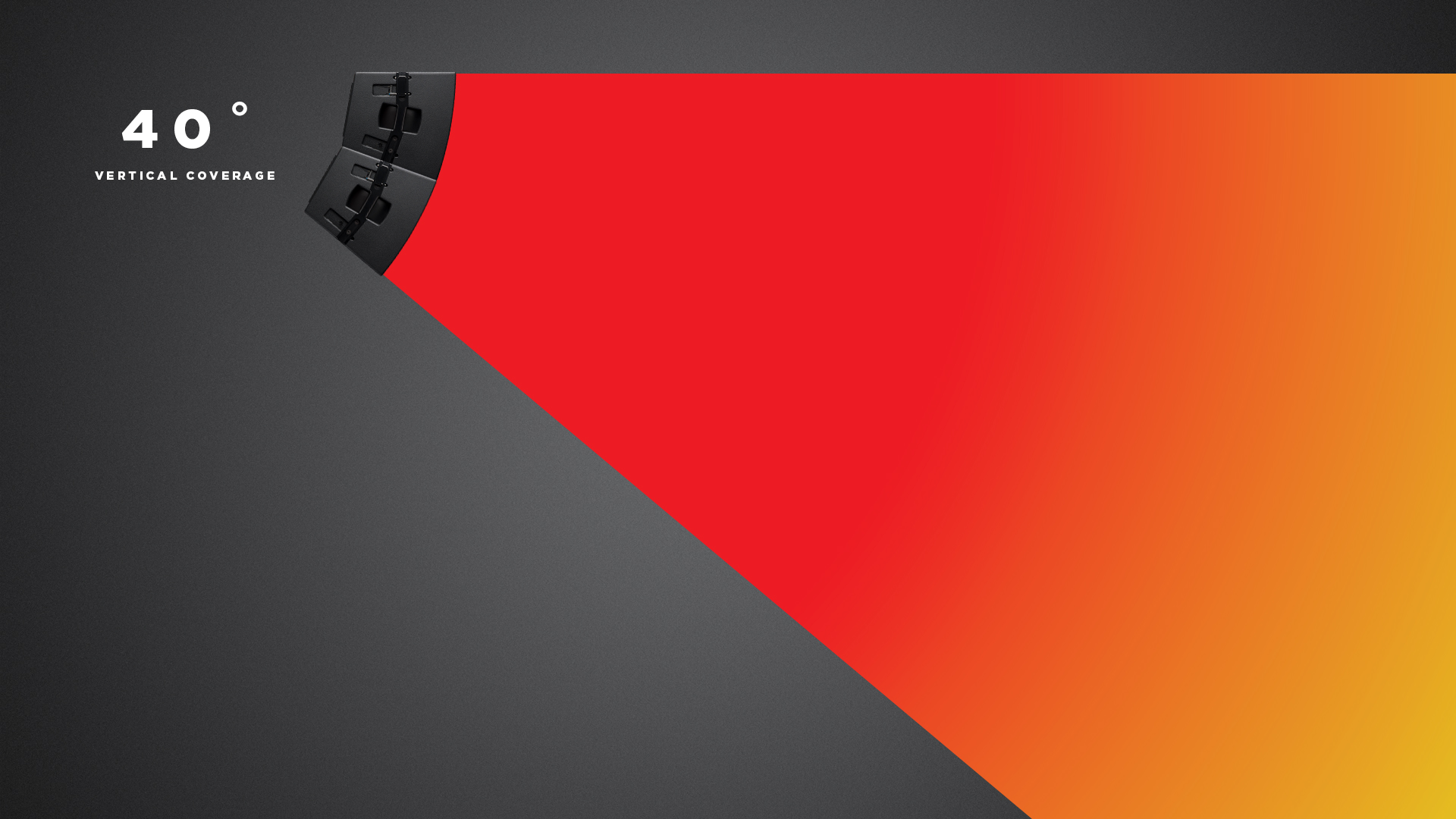 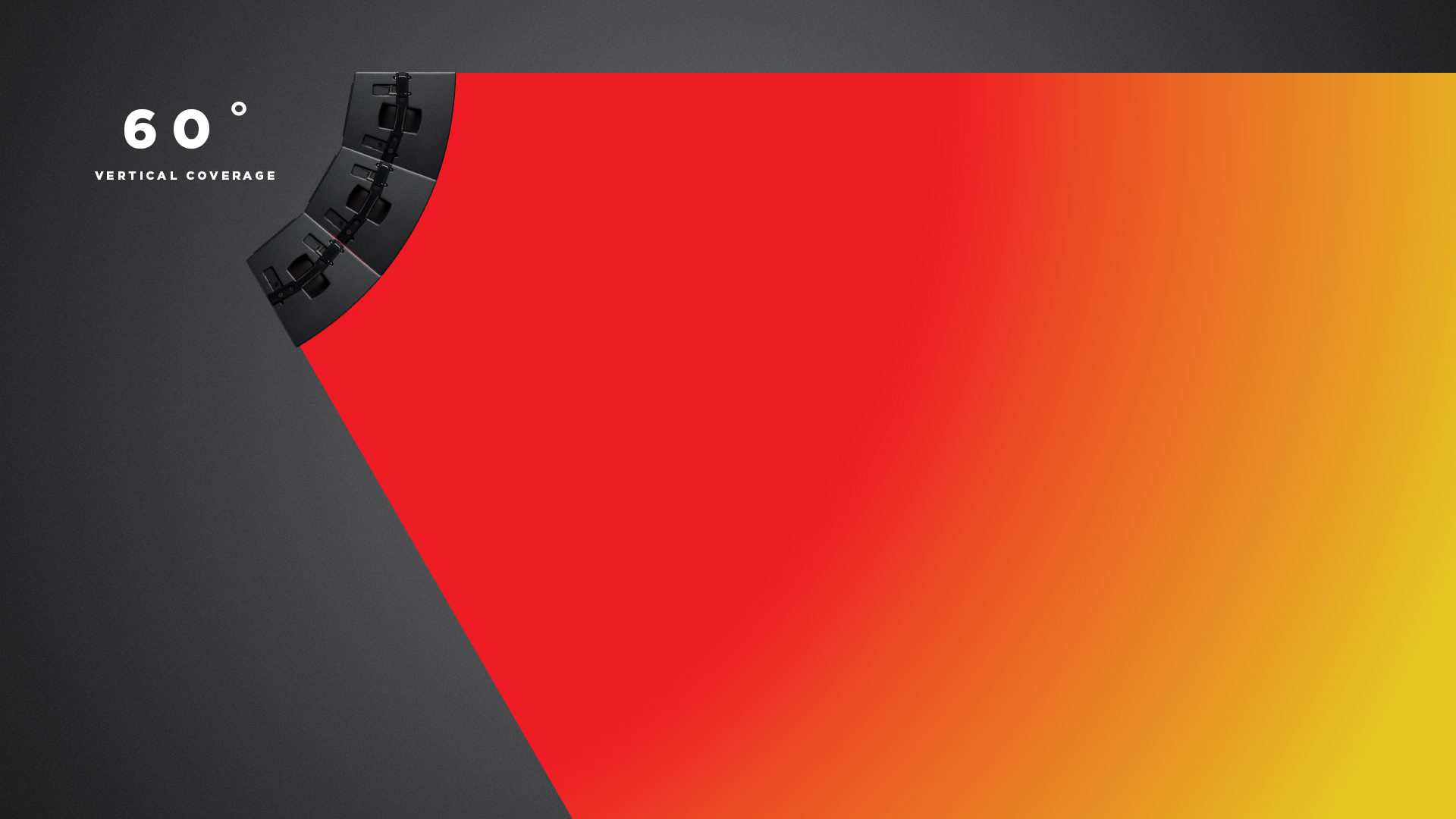 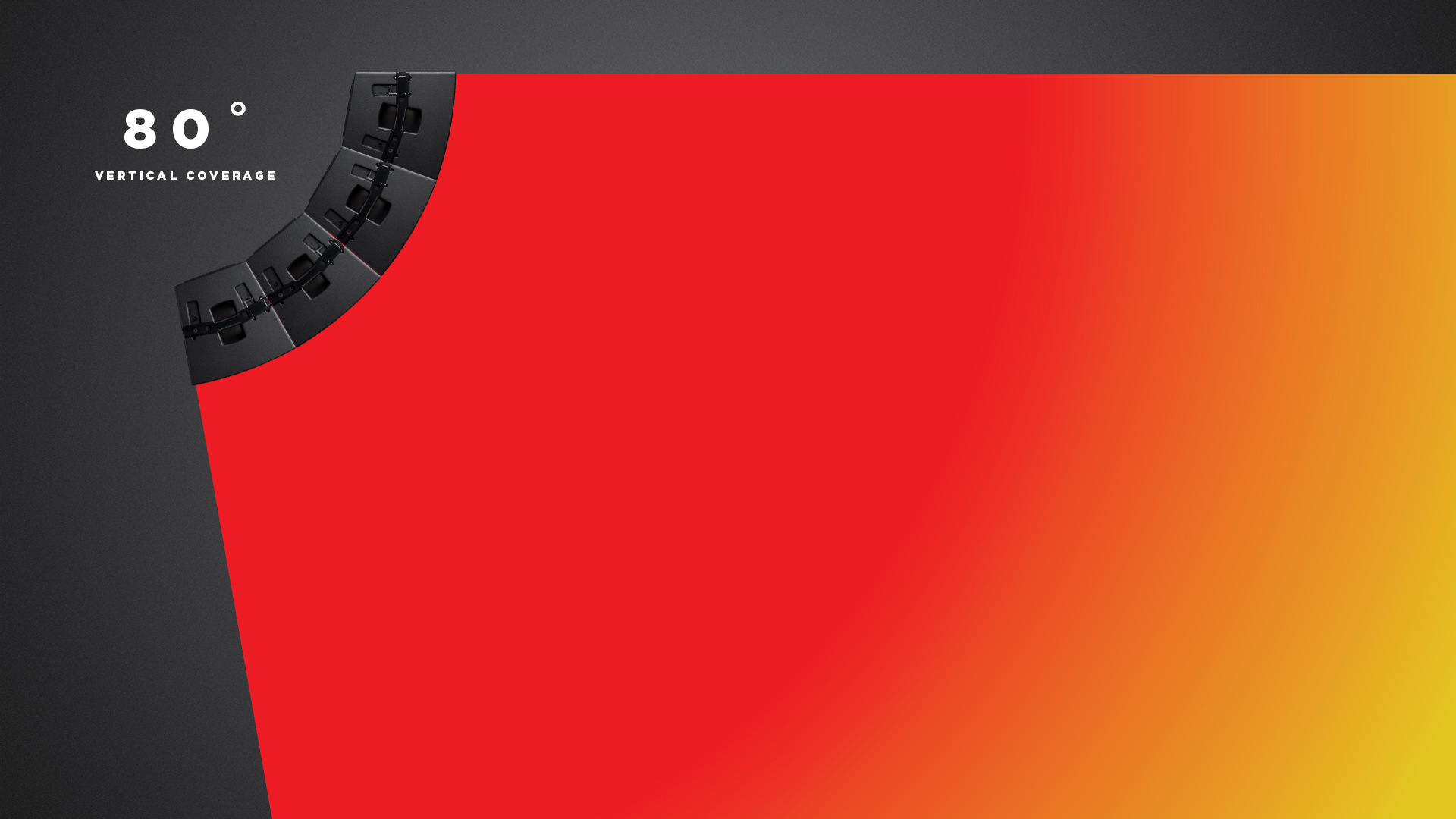 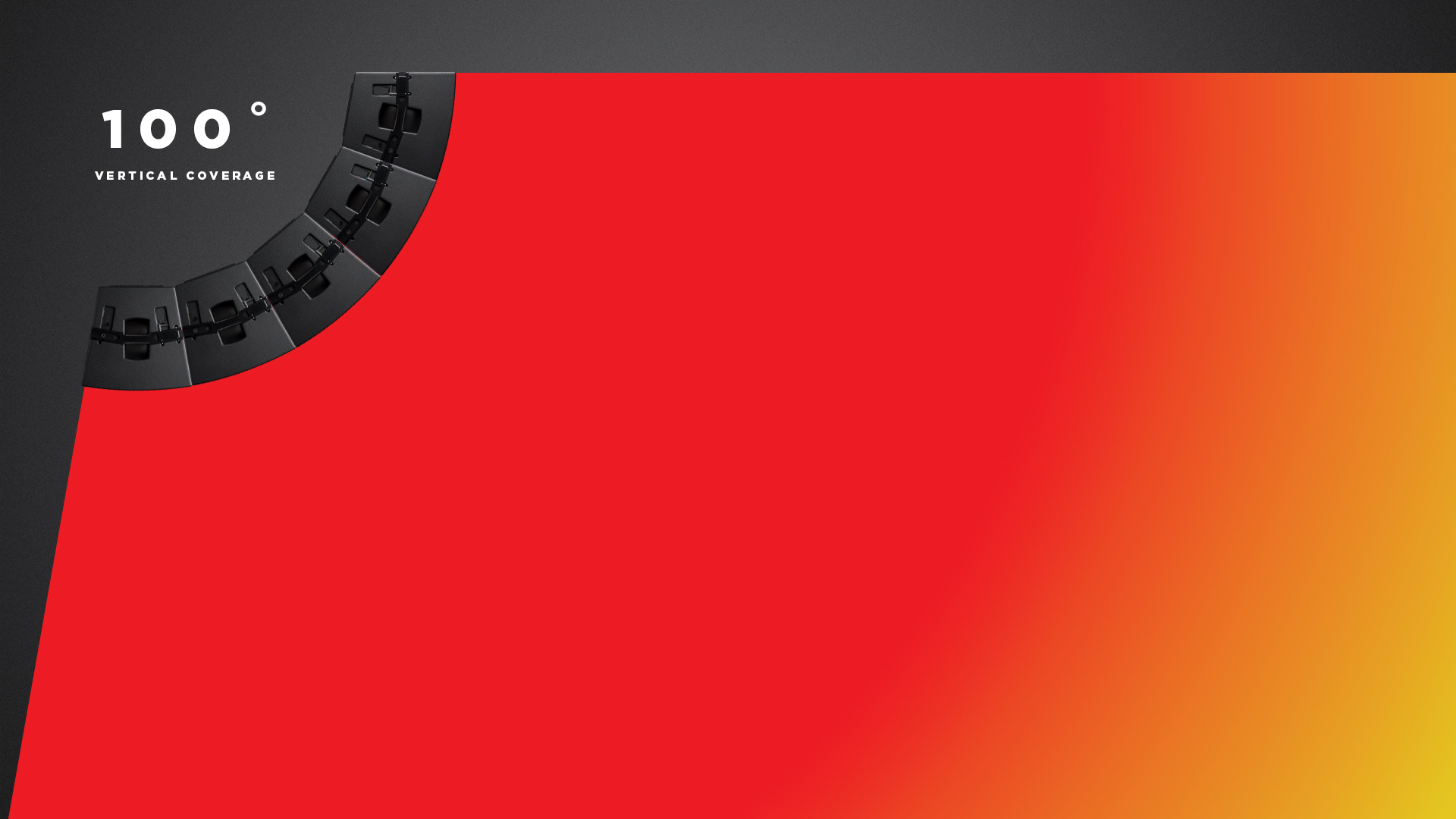 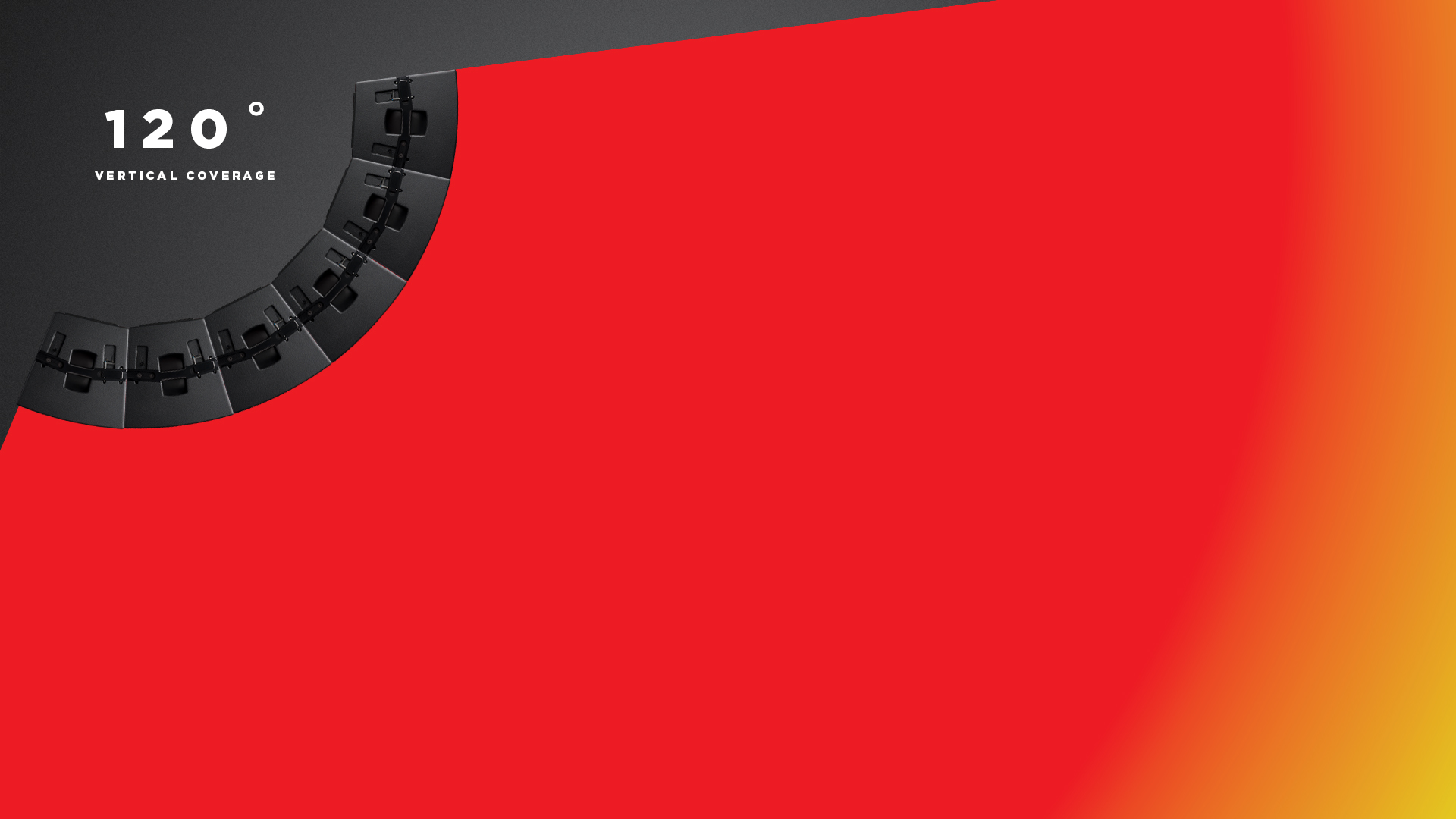 For more information on the patent-pending design of the CDL12, please see the AES paper presented at the 143rd New York Audio Engineering Society Convention by Don Keele Jr. and Hugh Sarvis in October 2017.