In 1995, we founded PreSonus Audio Electronics, Inc on the principle of designing innovative audio products that provide professional sound quality and features without sacrificing affordability. And for the last 25 years, our goal was simple: build innovative solutions for musicians, content creators, producers, and audio engineers. Today, PreSonus is a leading designer and manufacturer of both recording and live-sound hardware and software solutions that solve real-world problems for real working creatives. 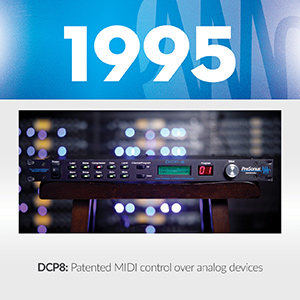 From humble beginnings in Jim's garage, our first product was the DCP8, a digitally controlled, 8-channel analog compressor/limiter/gate with fader and mute automation as well as grouping all under digital control. The secret to this design was digital (MIDI) control over analog circuitry. PreSonus was awarded a patent over this innovative technology in 1995 and it is still employed today in our XMAX-Remote mic preamp design used on StudioLive Series III mixers and Quantum-series audio interfaces.

In 1996, we developed and shipped the ACP8, the first multi-channel compressor with onboard bus link, allowing the user to link up to all 8 channels at once. The following year, Jim and his small engineering team continued this trend of affordable, innovative analog studio tools with the BlueMax, a unique stereo compressor that provided both preset compressor curves and full manual control. We also moved into our first official global headquarters, located on the second floor of Causey’s Furniture in downtown Baton Rouge, Louisiana. 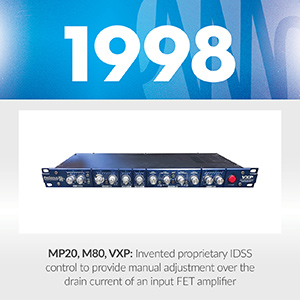 Between 1998 and 2000, we released our first famed series of mic preamps, hand-built in our new facility in the Baton Rouge Bon Carre Technology Park. The MP20, M80, and VXP all featured the proprietary IDSS control. This unique feature provided manual adjustment over the current drain on the input stage FET amplifier, allowing the user to boost the signal’s harmonic series evenly; providing warmth without distortion, a feature that quickly made these preamps popular among our first customers and are still sought out by the current generation of eBay gear-hunters. 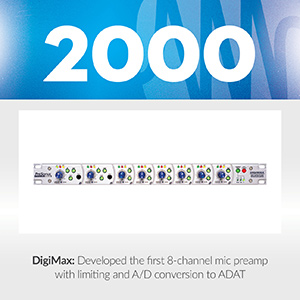 The story goes like this: during his dealer visits our current Senior Vice President of Global Sales, Rick Naqvi, noticed that the most popular audio interfaces at the time offered ADAT inputs for people to connect their ADAT machines and transfer audio to a computer, but not a lot of mic preamps to record a full band without needing a lot of outboard gear. That’s when Rick had what we call a “dude, dawg!” moment and called Jim with the crazy idea of putting ADAT A/D conversion on an 8-channel mic preamp so people could record a full drum kit, and thus the first DigiMax was born. Building on the success of our preamp designs, we released the original DigiMax 8-channel preamp with ADAT conversion. An industry-leading design, the original DigiMax and its successors provided therising group of home-studio recordists with the ability to easily add analog inputs to their ADAT-equipped audio interfaces.

Throughout this time, we continued to release products to support the burgeoning home recording revolution—including the first rackmount monitoring controller, fulfilling the function of the center section of a large format console for the small format, console-less home studio. Still shipping today, the Central Station and Central Station PLUS, as well as both versions of the Monitor Station, have brought advanced monitoring functions to two generations of in-the-box recording engineers. 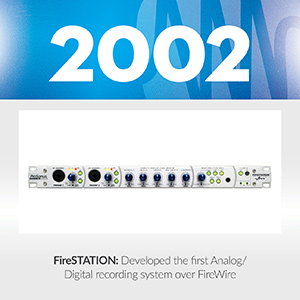 In 2002, we released our own audio interface, developing the first analog/recording system over FireWire on the market. The FIREStation and its successor, the FirePod (2004), quickly made PreSonus a popular brand among home recording enthusiasts, particularly because of the quality of the onboard mic preamps. The fact that the FirePod was the first FireWire audio interface on the market with eight analog mic preamps onboard made this product especially popular among DIY bands.

It is also during this time that our beloved engineer, Robert Creel, perfected his lauded XMAX preamp design. Engineered to provide transparent audio for audio interface products, today XMAX mic preamps are known the world over for their ability to deliver incredibly high headroom, deep lows, smooth highs, and a rich overall sound to bring out every detail in a recording, which is why they are still used on PreSonus audio interface and mixer products today. 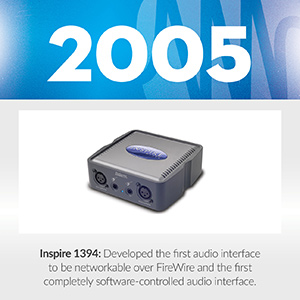 From 2005 to 2009, our engineering team worked at a feverish pace, releasing first-to-market product after product, bringing new features and tools to our growing customer base. Beginning in 2005, with the launch of the Inspire, PreSonus interfaces took FireWire audio recording to a new level. The Inspire 1394 was not only the first audio interface to be completely controlled via software, it was also the first audio interface that could be expanded simply by daisy-chaining multiple units over FireWire—a feature for which all PreSonus FireWire products would become known. 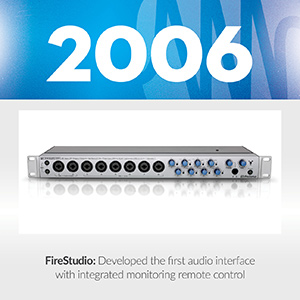 In 2006, we launched the FireStudio, the first audio interface on the market with surround sound and stereo monitoring control functions onboard, thanks to the unique, networked MSR Monitor Station Remote. The following year, we released the original FaderPort, the first single-fader DAW controller, finally providing a new generation of in-the-box mix engineers with the touch-sensitive motorized fader they needed to make automation fast and easy.

It was during this same year that Jim decided the best way to ensure the best user-experience possible was to provide a complete suite of recording tools. To that end, we partnered with KristalLabs Software Ltd., a startup company founded by Wolfgang Kundrus and Matthias Juwan, to begin working on Capture™ and Studio One®. In 2008, after a tremendous development effort, we released the original StudioLive 16.4.2 digital mixer with Capture v1, two landmark releases for us and our customers. 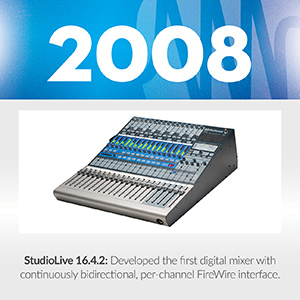 The StudioLive 16.4.2 was not only our first digital mixer, it was also the first digital mixer to feature a continuously bidirectional FireWire interface and a one-to-one workflow that made it easy to perform virtual soundchecks, insert plug-in effects, and return playback streams to individual channels on the mixer. Featuring the same Fat Channel for which StudioLive mixers are now famous, the StudioLive 16.4.2 was a runaway hit product, bringing a host of intuitive and powerful digital mixer features at an affordable price point. Capture was another first-of-its-kind product, a truly integrated multitrack recording application dedicated to making recording with a StudioLive mixer as easy as possible.

This five years of firsts culminated in the release of Studio One in 2009, the first DAW with integrated recording and mastering in the same application. Studio One’s intuitive drag-and-drop workflow quickly garnered it a core following of loyal users. At the end of 2009, PreSonus acquired all of KristalLabs’ assets, leading to the creation of PreSonus Software Limited and a new global team of engineers and creative thinkers.

Building on the success of Studio One’s initial launch, Matthias and his team of Studio One developers teamed up with another startup: Soundcloud. In 2010, Studio One proudly became the first DAW with direct-to-Soundcloud export. This innovative feature meant that Studio One users could now record, produce, mix, master, and publish their music all from a single application.

During the development of Studio One v2, the PreSonus Software team began a co-development effort with Celemony to create the Audio Random Access (ARA) plug-in extension to facilitate the full integration of Melodyne into Studio One. In 2011, the revolutionary feature was unveiled as an industry first. 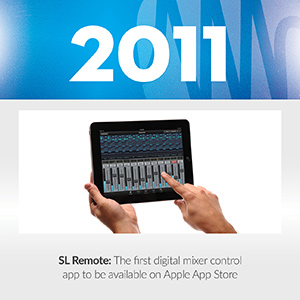 In 2012, we collaborated with Rational Acoustics to add SMAART Wizards to the VSL application for StudioLive mixers, making them the first digital mixers with integrated SMAART room analysis. This same year, we released QMix, the first iPhone remote monitor mixing app for a digital mixer.

During the development of the StudioLive AI-series digital mixers, our software team in Hamburg invented a new technology that would become critical to creating a fully integrated hardware/software user experience. UCNET was unveiled in 2013 and brought a new level of integration between StudioLive AI-series mixers, Capture, and Studio One. With UCNET, Capture could now facilitate a fully automated Virtual Soundcheck, remotely engaging digital returns and recalling StudioLive mix scenes at the click of a button. Studio One also added the Fat Channel plug-in and the ability to load StudioLive mix scenes onto the Studio One console when loading Capture sessions.

In 2013, we acquired the assets of Notion Music, adding Notion™ music notation and composition software and their other solutions to our product line-up. This innovative product was the first notation app to run on iOS in addition to Mac and Windows, one of the most downloaded music creation apps, and was featured in Apple TV commercials and ads worldwide. Notion and their team were a natural fit in the PreSonus culture of inventive technology development. 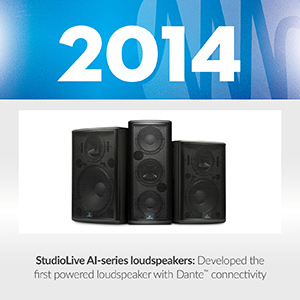 This same year, we released our first speaker products. The Eris- and Sceptre-series studio monitors quickly garnered praise and popularity for their accurate frequency response and sonic clarity. Created in partnership with Dave Gunness and Fulcrum Acoustics, we also released the StudioLive AI-series loudspeakers, the first powered loudspeakers with iPad control over the onboard systems processors and featuring the same horn-loaded coaxial design with Temporal Equalization™ as the Sceptre-series studio monitors. In 2014, we released a Dante option card for the StudioLive AI-series loudspeakers, thus creating the first ever Dante-equipped powered loudspeaker. This was also the year that we acquired WorxAudio, a respected manufacturer of commersional sound-reinforcement speakers.

2014 culminated in our big move into our gorgeous new high-tech headquarters and research facility at 18011 Grand Bay Court in Baton Rouge, now home to our U.S. team of engineers, tech support gurus, sales force, repair technicians, marketers, and a finance team that bleeds LSU purple and gold. At the center of our offices sits River City Studios. Designed by Walters-Storyk Design Group, River City Studios is the beating heart of our facility. 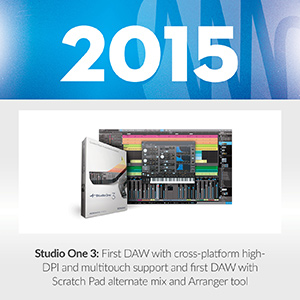 Studio One version 3 was released in May of 2015 to great acclaim, becoming the first DAW with cross-platform high-DPI and multitouch support as well as adding features that are still unique today—including Scratch Pads and Mix Engine FX for engine-level console emulation. 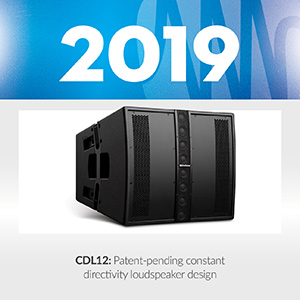 In 2017, our Head of Loudspeakers Hugh Sarvis and legendary speaker designer Don Keele presented a white paper at the AES Convention that would become the blueprint for the patent-pending CDL12 design. Combining the best aspects of point-source and line-array technology, the CDL12 loudspeaker quickly began garnering praise and awards almost as soon as it launched in 2019.

While our loudspeaker division was creating a patent-worthy design, the rest of our engineering team got back to our studio roots to create the Quantum-series audio interfaces. Sporting 120 dB dynamic range and an advanced custom Thunderbolt driver, the Quantum-series audio interfaces have the unique privilege of being dubbed “The Fastest Thunderbolt Interface on the Planet” by Sound on Sound magazine. 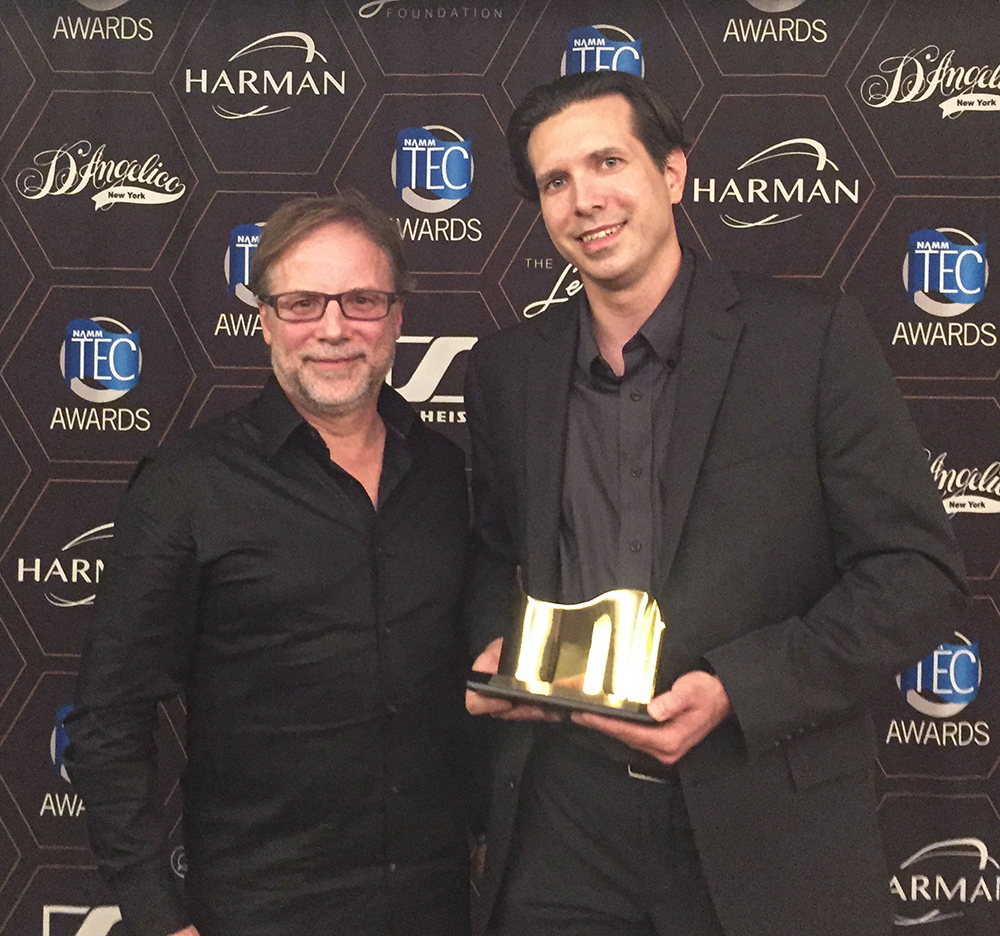 In May of 2018, Studio One version 4 was released and delivered on the tagline “Create without Boundaries. Produce without Limits.” Version 4 delivered an amazing set of new and innovative features including: Chord Track, Chord Selector, Arranger Track, Scratch Pads, Impact XT, and much more.

In 2019, after years of continued growth, our Eris monitors became one of the best-selling studio monitors in the world. It was also during these years, that PreSonus products were awarded their first TEC awards: Capture for iPad (2015), Notion 2 for iOS (2016), FaderPort 8 (2018), and FaderPort 16 (2019). 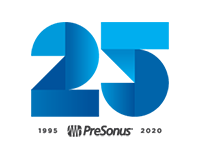